← The Queen of “Twerking” Returns!
Give a Dog a Bone →

The Lap of Luxury

I don’t know who does Watson’s hair, but I would love to meet them! (Pittsburgh Police)

On Tuesday, some well-to-do travelers visited the upscale Omni William Penn Hotel in Pittsburgh and rented the presidential suite, a posh dwelling with crystal chandeliers and every luxury imaginable.

What was unimaginable, however, was the individual they would find sleeping on the sofa of their rented suite: 48-year-old homeless man Jeffery Watson.

He also has one hell of a stylist, as you can see from his picture.

Apparently, the hotel was holding some kind of reception and left an outside door unlocked so guests could more easily access the event. This is the door Watson used to gain entry into the hotel, but then he somehow managed to make it all the way to the presidential suite without anyone noticing him. 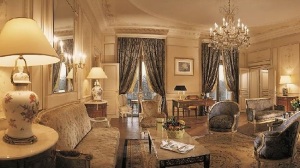 The presidential suite at the Omni William Penn Hotel (Supplied)

And believe me… I would notice a man who looked like Watson wandering through an expensive hotel—funny how no one else did, though.

Nevertheless, the police were called, Watson was arrested and he now resides in the Allegheny County Jail, whose accommodations are described on their website as being “simple, sturdy and secure.”

A far cry from his previous “digs,” to say the least!

← The Queen of “Twerking” Returns!
Give a Dog a Bone →