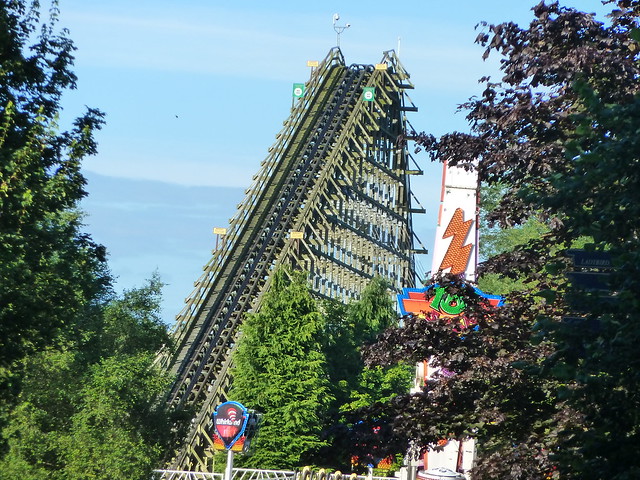 The last few months have seen members of the Islamic terrorist group ISIS behead American journalists James Foley and Steven Sotloff. And earlier today, 30-year-old Alton Nolen of Oklahoma was charged with first-degree murder and assault for allegedly killing two former co-workers at the processing plant where he once worked—he beheaded one of them with a knife.

In other words, “off with his head” (or her head) seems to have been taken to heart by psychos everywhere. Unfortunately, news of another beheading was just released, only this time the victim wasn’t a human being; it was a deer.

The accident happened on The Ultimate, a steel roller coaster at the U.K. theme park Lightwater Valley. Saturday morning, riders on the coaster were cruising down a long stretch of track in a wooded area when they hit and decapitated a young deer, who died instantly. Some passengers were sprayed with blood as a result, but otherwise no one was injured.

Of course, this isn’t the first time The Ultimate struck one of Bambi’s kinfolk. In 1994, the coaster hit a deer, ripped off its legs and left its antlers stuck in the safety bars. Blood-soaked passengers were traumatized by the incident, but thankfully only one person was injured.

Maybe it’s me, but The Ultimate doesn’t seem like the best name for this “killer coaster”… unless they change it to The Ultimate Bloodbath!

Lollipops are supposed to make people happy on their own! (Grumpes)

Bringing treats to school for your friends and classmates isn’t a new concept. Both students and parents seem to be trained to do this from elementary school and beyond. Of course, the kind of treats you bring can make a huge difference, as one girl from Enfield High School in Connecticut just learned.

On Monday, the girl-in-question supplied numerous students with lollipops—only these were both sweet and psychedelic.

They were pot pops—lollipops laced with THC, the active psychotropic ingredient in marijuana.

Apparently, the girl ordered the lollipops from California by mail and distributed them to her friends. Unfortunately, some of the pops reached other, unintended targets, including a 16-year-old girl who was hospitalized Monday night. Thankfully, she should be fine.

Of course, the pot pop delivery person may not be so lucky. Since she’s a juvenile, she will not be arrested and will instead be referred to the juvenile court system. No word yet on her punishment, but one thing is for certain: she won’t look at lollipops the same way again!

Coates can misbehave with me anytime! (georgia.arrests.org)

This past June, 30-year-old Jeremy Meeks of Stockton, California caused quite a stir when his “sexy” mug shot went viral. He had been arrested on five weapons charges and one gang charge, but that didn’t stop women around the world from drooling over his “Hot Convict” image.

The fact that he’s a career criminal and scumbag didn’t deter them from swooning over him, in other words.

The 22-year-old model—who once appeared in Jet Magazine as their “Beauty of the Week”—was recently arrested for disorderly conduct in DeKalb County, Georgia. She was released on bond the same day, but that didn’t stop thousands of Internet admirers from offering to pay her bail. And when you see her picture, I’m sure you will understand why.

If this is what female criminals look like these days, then please victimize me next. I’m kidding!

Last Saturday, New York State Police arrested a man for allegedly touching himself near Love’s Travel Stop in Kirkwood. The 56-year-old man—who was wearing eye shadow and lipstick at the time—was charged with public lewdness, a misdemeanor.

Of course, it wasn’t this naughty act that got my attention—people get busted while playing with themselves in public all the time. However, not many of them have a name that suits their crime. What makes this pervert different, you ask?

His name is Calvin Wank.

Now tell me that doesn’t warrant some blog attention!

If you grew up in America in the 1980s, odds are you’ve heard the 1982 John Cougar Mellencamp hit “Jack and Diane.” It’s a “little ditty” about a couple of American kids “sucking down chili dogs outside the Tastee Freez.” Ring a bell?

Well, here’s something you probably didn’t know about the song: it was originally written about an interracial couple!

During an interview on HuffPost Live yesterday, Mellencamp confirmed that in his original lyrics, Jack was actually a black guy.

“Originally the line was Jack was not a football star, Jack was an African American,” the popular singer confessed. “In 1982, when I turned the song in to the record company, they went, ‘Whoa, can’t you make him something other than that?”

Mellencamp wasn’t interested in changing his lyrics initially, but did so “because he thought it was a little much for the early eighties.” And a brother has to get paid, right?

Fortunately, Mellencamp doesn’t regret his decision—most likely because the song is so popular, even today—and as someone who grew up in the 1980s, he likely made the right choice. Of course, he could reissue the song with his original lyrics… and I even provided him with a new title.

“Little ditty about Jacquan and Diane…”

When You Quit, Make It Memorable!

Quitting a job is never easy. Sure, you may convince yourself the time has come to part ways with your organization. You may even have solid reasons for doing so, but the fact is that quitting a job can be scary. What will you do now? How will you make ends meet? Will anyone ever hire you again?

Fortunately for Charlo Greene—a newswoman on KTVA in Anchorage, Alaska—she had another job lined up when she decided to quit her reporting gig. Her plan is to focus on marijuana legalization in her state as owner of the Alaska Cannabis Club. And the way she quit her day job was classic.

“Everything you’ve heard is why I, the actual owner of the Alaska Cannabis Club, will be dedicating all of my energy toward fighting for freedom and fairness, which begins with legalizing marijuana here in Alaska. And as for this job, well, not that I have a choice but, fuck it, I quit.”

You read that right: “fuck it, I quit.” Non-believers can see for themselves by going HERE.

Now tell me that wasn’t the best quitting job ever… almost as classic as her co-anchor’s reaction!

Earlier today, I ran across the most heartwarming—and heartbreaking—story that I feel impelled to share it with you fine people. It happened in Ohio recently and truly shows how unselfish and courageous people can be.

On Tuesday morning, students arriving by bus at Middlebury Academy were asked to perform evacuation drills. Children ranging from kindergarteners to 8th graders first exited the front of the bus, then lined back up, returned to the bus and started to evacuate through its rear exit.

For whatever reason, the bus started to roll backwards as the last student—a 10-year-old girl—was exiting. Without even blinking, 51-year-old bus driver Laura Zborowski grabbed the little girl and tossed her safely onto the nearby grass. Unfortunately, she didn’t have time to save herself—the bus rolled right over her. She was pronounced dead a few hours later.

In other words, Zborowski paid the ultimate price and sacrificed her own life for the life of a child. She is being hailed as a hero in her community because, let’s face it, she is a hero. And though I hate to hear about anyone losing their life, it warms my heart to see how selfless and brave our fellow humans can be when they put the needs of others above their own.

Maybe there is some hope for the future…

I hate when I get so tied up with work-related activities that I simply can’t develop a solid blog post. Fortunately, I have a small window of opportunity now, so prepare for a “quick fire” edition of the Reality Round-Up!

In California, a man named Ryan Eddy Watenpaugh was arrested for allegedly cooking his girlfriend’s dog—after a fight, of course—and then serving it to her for dinner! She had no idea what she was eating, so he sent her a text message a few days later and asked how her dog tasted. Watenpaugh then went to her house and left a little gift on her doorstep: the Pomeranian’s severed paws! Needless to say, he was charged with domestic violence, animal cruelty and several other crimes. And to make matters worse, police found an AK-47 assault rifle and high-capacity magazines in his home, which means he could be going away for a long, long time.

Gilman proved that women can rape men, too (PinIt)

In Seattle, Washington, 26-year-old Chantae Gilman was charged with second-degree rape for breaking into the home of a 31-year-old man, straddling him in his bed and raping him while he was sleeping. Fortunately, the man woke up in time to break free of his 240-pound “secret lover” and phone police, who arrested Gilman and took her to jail. Apparently, she suffers from mental illness and could not recall the late-night attack. I include it here only because so few female-on-male rapes seem to be reported, but it’s obvious they happen more often than we know.

Finally, in Jeffersonville, Indiana, convicted killer Joseph Oberhansley now faces new murder charges after admitting to not only killing his girlfriend, Tammy Jo Blanton—a woman who posted his bond on an earlier charge—but also eating parts of her lungs, heart and brain. Officers found Blanton’s body in the bathtub of her home with whole sections of her skull carved out. And when they finally arrested Oberhansley, he admitted to cooking and eating her missing body parts. How disgusting is that?

Yes, crime is alive and well in America and no one is safe. Watch your backs, people, so the next victim won’t be you!

According to Wikipedia, virtual reality is a computer-generated environment “that can simulate physical presence in places in the real world or imagined worlds” and can “recreate sensory experiences” like smell, sight, sound and—of course—touch.

It’s this last sensory experience that caught my attention today because—believe it or not—someone has actually created a virtual reality boob-squeezing game.

A recent VIDEO posted to the Japanese site NicoNico Douga by someone named Ryuto showcases this new invention: the Oculus Rift Boobs Simulator, or ORBS. Using a LeapMotion pressure sensor, an Arduino control board, an Oculus Rift VR headset and a cushioned mouse pad, ORBS allows users to grope a fictional anime character named Mami. And what’s worse is that whenever her breasts are squeezed, Mami recoils.

Yes, leave it to technology to help train a new generation of sexually harassing perverts! As if there weren’t enough out there already!

Saturday evening was pretty eventful for superheroes in New York City’s Times Square—or for panhandlers dressed like superheroes, at least.

While hustling for tips on a street corner, 41-year-old Jose Escalona-Martinez (Batman) and 35-year-old Abdel Elkahezai (Spider-Man) were accosted by a drunken passerby—23-year-old Thomas Rorke.

For whatever reason, Rorke grabbed Batman from behind and screamed, “I’m gonna fuck you, Batman!” He then grabbed Spider-Man’s ass and suffered a web-slinging attack, which was actually Silly String.

Apparently, that was enough to start a fracas that ended with all three men—superhero or not—arrested and hauled off to jail. As it turned out, Spider-Man (Elkahezai) had a record that included assault, weapons possession and public urination, but an unidentified man dressed as Captain America stuck up for his wall-crawling friend.

“He’s one of the best guys, honest, religious,” the Captain told reporters. “One of the first guys out here.”

The Avengers and Justice League could not be reached for comment.