The WordPress.com stats helper monkeys prepared a 2014 annual report for this blog.

The Louvre Museum has 8.5 million visitors per year. This blog was viewed about 290,000 times in 2014. If it were an exhibit at the Louvre Museum, it would take about 12 days for that many people to see it. 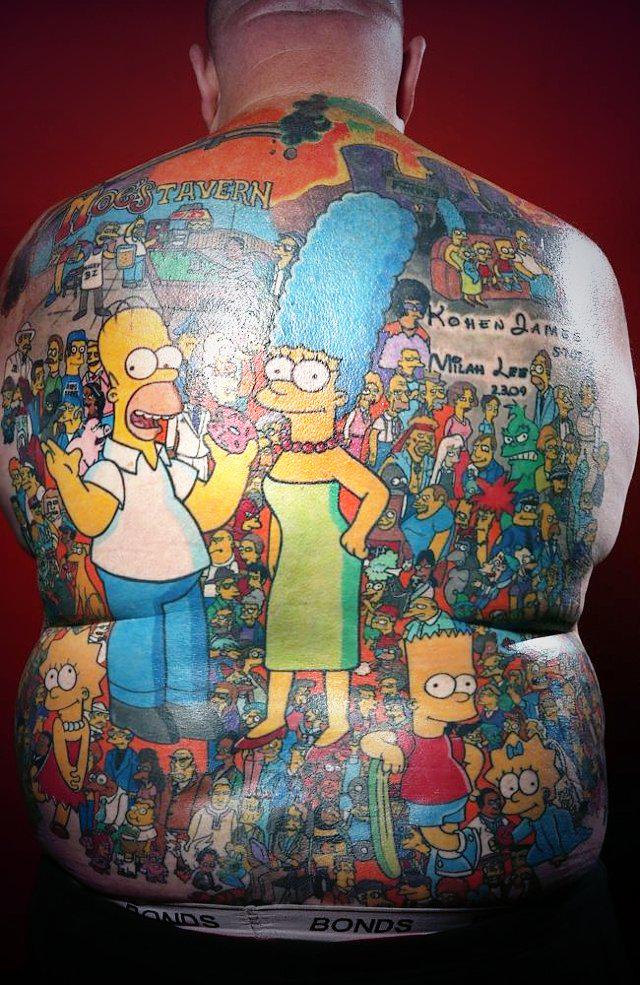 All of Springfield is behind him… literally (Ms.Ausretrogamer/PinIt)

Now if he isn’t a Simpsons lover, I don’t know who is!

Most people know that when driving in icy conditions, it is unwise to over-correct and jerk the wheel since doing so could send you slip-sliding away. This is the message the South Dakota office of Highway Safety hoped to convey through their new ad campaign but, sadly, the campaign has been yanked.

It was known as Don’t Jerk and Drive… and you can see why some people may have been offended by its masturbatory allusions.

“I decided to pull the ad,” secretary of the Department of Public Safety Trevor Jones said in a recent statement. “This is an important safety message and I don’t want this innuendo to distract from our goal to save lives on the road.”

Personally, I like the ad. It certainly captures your attention, don’t you think?

Given the recent killings of unarmed African-Americans by police—as well as the lack of indictments in these cases—it should come as no surprise that law enforcement officers are not very popular right now. Of course, we should all remember that for every bad cop, there is a good cop doing his job correctly and for the right reasons.

Don’t believe me? Then consider these stories of cops doing right by the people they serve—and spreading some Christmas joy in the meantime.

Last Saturday, officers in Boynton Beach, Florida responded to an emergency hang-up that turned out to be little girl playing with the phone in her home. While they were speaking with the girl’s mother, they learned she was a single parent who was struggling so much that she couldn’t even afford a Christmas tree. So what did they do?

They went out the next day, bought a tree with all the trimmings and delivered it to the family for Christmas. And after the little girl’s reaction “melted their hearts,” they decided to take things one step further: they plan to return with gifts, too!

Now if that doesn’t show the true meaning of Christmas, I don’t know what will… except maybe this next story!

For the past three years—as part of their Cops for Kids program—Pantego police officers in Texas have allowed drivers to get out of traffic citations not with cash, but with gift donations for Cook Children’s Hospital in Fort Worth. Here’s what drivers receive instead of a ticket:

Much better than a ticket, don’t you think? (Pantego Police Department)

How’s that for Christmas spirit?

Both of these stories should have warmed your heart, but I saved the best for last. Here’s a story that would even bring a smile to Scrooge’s face.

For several days in November, the police department in Lowell, Michigan did something completely unexpected. After pulling drivers over for minor infractions, officers made small talk with people and asked what they or their children wanted for Christmas. Little did they know that while they were speaking, a group of Santa’s helpers were standing by at a local store to purchase gifts for them, which were then delivered car-side by the very officers who pulled them!

Check out the video for yourself by going HERE. I promise it will make your day.

Yes, there are cops who break the law, abuse their power and harm—or even kill—people. However, we all need to understand that police officers are human, too. And for every bad cop, there are tens, hundreds or even thousands of officers who genuinely serve and protect us the right way—like the officers in these stories.

This Christmas, I hope we will remember them as much as we do those we lost to bad cops this year. After all, a few bad apples shouldn’t spoil the bunch, especially during the holidays!

Jingle All the Way

They shake like two bowls full of jelly! (Sara X/YouTube)

In need of a little more Christmas cheer?

If so, then look no further than this VIDEO posted by none other than Sara X, the infamous boob-twerking model whose implants danced to Mozart in October—and raised awareness and money for breast cancer research in the process.

This Christmas, her boobs are twerking to that holiday favorite “Jingle Bells.” And their performance will warm your heart… and maybe a few other places depending on your sexual orientation.

I hope it brings you as much joy and wonder as I would experience if Sara X were sitting across from me with her hands behind her back!

Carson is the cutest delivery guy around! (UPS)

I am a sucker for good, heartwarming advertising—especially during the holidays. Anything that can save me from “he went to Jared” or “every kiss begins with Kay” is great in my book. Unfortunately, I am unable to embed video on my blog, but that doesn’t mean I can’t link to one.

Need something to make you smile during this stressful holiday season? Then check out this COMMERCIAL from the people at UPS. It’ll warm your heart faster than a stiff egg nog or hot toddy, I assure you.

Jackass of the Day VII

A while back, I started assigning Jackass of the Day awards to people in the news who either did something stupid or said something stupid. And trust me when I tell you that today’s recipient may be more deserving of this title than anyone I have featured here before.

In a sermon delivered late last month, Anderson cited Leviticus 18:22 and offered his final solution for ending HIV/AIDS. He explained that homosexuals are “filled with disease because of the judgment of God,” and things took a more ignorant turn as he continued:

“Anybody who’s a homo or bi—it’s all the same category—sodomite is what the Bible would call them… it was right there in the Bible all along… it’s curable right there… if you executed the homos like God recommends, you wouldn’t have all this AIDS running rampant.”

Basically, Anderson claimed “we [could] have an AIDS-free world by Christmas” if we “executed” all gay people. See for yourself by going HERE.

Correct me if I’m wrong, but isn’t “thou shalt not kill” one of the Ten Commandments? And weren’t they supposedly handed down by God and delivered by Moses? I’m no Biblical authority, but I do remember something about this from Sunday school.

Of course, Anderson is the same jackass who once argued for women to remain silent in church. “Let the woman learn in silence with all subjection,” he said in a prior sermon. “But I suffer not a woman to teach nor to usurp authority over the man.”

Christmas is coming and all around the country, children—and even some adults—are visiting with Santa’s helpers, sitting on their laps and sharing what they hope to receive during this festive holiday. Of course, this experience isn’t always as positive as it could be, which should be evident from the following photos. Here are a few pictures of Santa’s lap and the fear… I mean joy… that sitting on it can bring.

Ah, the joys of childhood (We Know Memes)

Maybe I should dress as Santa next year… (Blog U)

I suppose that I should preface this post with a SPOILER ALERT. Those of you who have not yet seen last night’s midseason finale of AMC’s hit show The Walking Dead should probably stop reading now. The news I have to report is not good.

As has been the case with past midseason finales—most notably last season’s beheading of Hershel by the Governor—another beloved character has been killed. Last night saw the quiet, pure and unassuming Beth meet her untimely end at the hands of Dawn, a cop gunned down seconds later by Daryl.

Now Glenn is the only “family” that Maggie has left.

Like many other fans, I was shocked to see Dawn accidentally blow Beth’s head off following a scissor stab to the neck. I also expected a bloodbath to ensue with the remaining hospital survivors, but alas, two deaths seemed to be enough to pacify TWD gods. And like so many others, I was grateful for that.

So farewell, Beth. You will be missed.